Baoli Cui, a Full-time Teacher of the School of Digital Media, Won a Silver Medal in the 8th Fujian University Art Design Competition

“The 8th Fujian Provincial Art Design Award”, as one of the important contents of this fair, has been valued by many leaders. The 8th Fujian Provincial Art Design Award was co-sponsored by the Fujian Provincial Department of Education and the Xiamen Municipal People's Government, and undertaken by the Xiamen Municipal Education Bureau and other institutions. The awards for the College Art Design Awards started in July and lasted for 4 months. They received positive responses from 41 institutions. A total of 2,377 entries were presented, and the highest number of entries ever. After the initial evaluation at the end of September, a total of 240 finalists were exhibited in the comprehensive exhibition area of the university and the final evaluation was carried out on site. The participating works are divided into four major categories: arts and crafts design, product design, visual communication design, and digital animation. 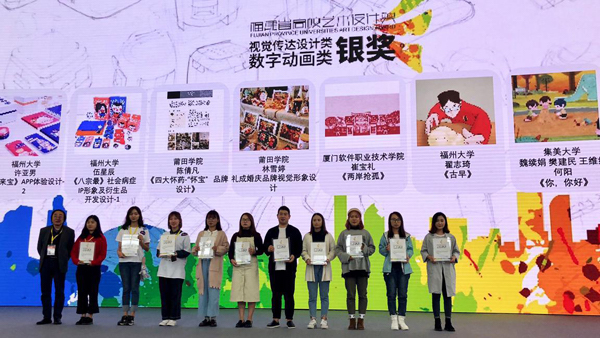